A recent bill making the rounds through the House of Representatives this past month has finally come to a hearing on the Congressional floor holding stiff regulations for participants in the Supplemental Nutrition Assistance Program, SNAP. Also called food stamps, the bill outlined legislation that would hurt farmers and rural residents while proposing rollbacks on restrictions on the wealthy.

Fortunately, the bill failed to be passed this Friday, the second blow to an embarrassing defeat by House Speaker Paul Ryan when an early draft of the farm bill was proposed. The loss is part of an ongoing battle amongst Republicans, however, some argue that this only delays the inevitable. Up to 2 million SNAP recipients could lose their benefits under the farm bill’s rule changes.

Minnesota Representative Tom Emmer summed up how the impact of the proposed farm bill could seriously harm farmers, ranchers, and agricultural workers across the United States:

“Today, farmers are suffering some of the worst rates of suicide in the nation. Stress to make ends meet, social isolation, a downturn of the market, low farm income, regulatory strains, and lack of treatment options all make it hard for farmers to get the help they need.”

SNAP is largest and most effective anti-hunger government program in the United States, with 1 in 8 Americans enrolled. Participants are mostly children, seniors, those with disabilities, and families who can only afford a basic diet. Continued research reports and studies support claims that SNAP has positive long-term impacts on health for those involved. In addition, SNAP combats food insecurity and alleviates poverty—although offering a modest $1.40 per person per meal—and even allegedly boosts children’s’ educational attainment.

The 2018 farm bill was grounded in the principles to slash the benefits SNAP would provide to members, a move that could possibly put millions at increased risk of hardship. 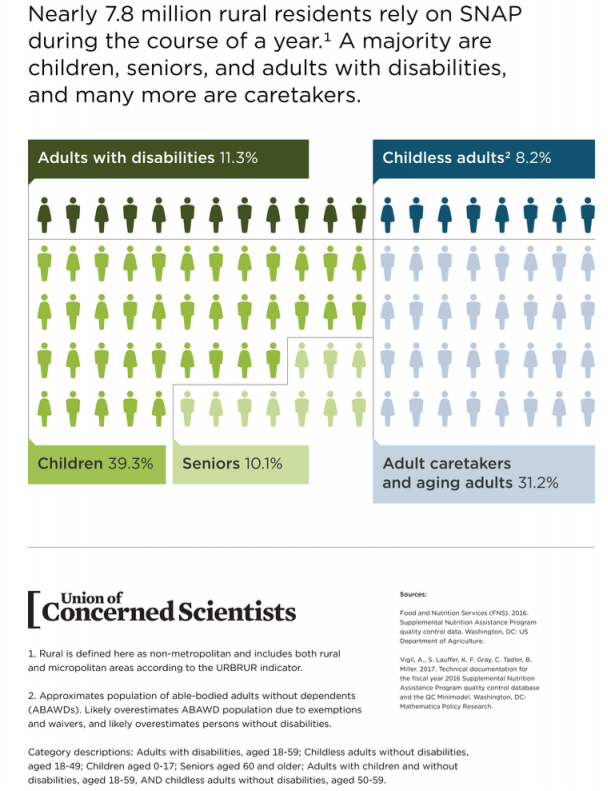 Republicans made it clear, however, that the fight isn’t over. They argue that the controversial changes to SNAP could end the dependency of lower-income recipients have for the program.

The core of the proposed farm bill, as the motives behind the Republicans’ actions are telling, seems to instead be focused on farm subsidies at the expense of taxpayers and SNAP participants. Since 2002, Congress has diligently added multiple methods to prevent federal farm subsidies from going to the hands of wealthy farm-owners. The new bill aims to include an exemption certain business could exploit to be eligible for those subsidies.

As CNN notes on the subject, a simple accounting trick could enable billionaire farm owners to once again be eligible for lucrative farm subsidies, a move that would cause severe damage to the community of smaller farmers, ranchers, and agricultural workers. It appears that, instead of seeking to implement legislation designed to reduce dependency on SNAP for low-income members, the proposed farm bill would instead increase that reliance whilst enabling wealthy farm owners to exploit the system to acquire even more money.

Perhaps the most interesting element of this story? That many of the Republican Congress members supporting this farm bill already receive massive federal farm subsidies. The big want to get bigger.

What do you think about the proposed farm bill? Are you or someone you know a SNAP recipient? How reliant are you on these programs to help feed your family? How do you think potential rollbacks on benefits could affect you? Let us know down in the comments!