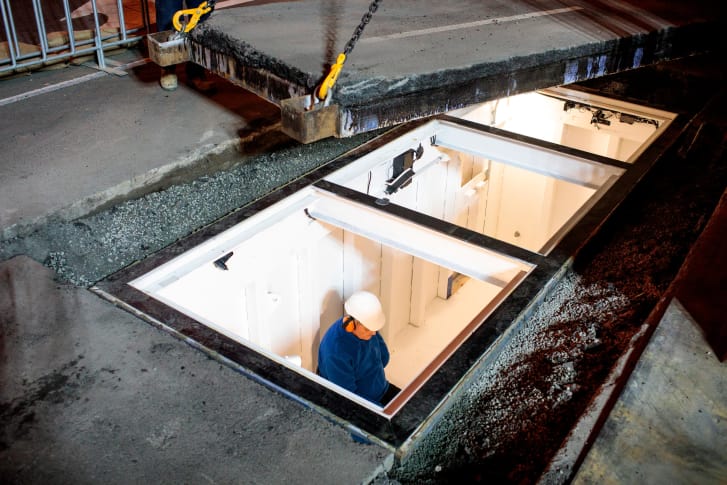 Mike Parr is about to have a very long, and very claustrophobic, next three days. The Australian performance artist, 73, has been buried alive beneath a busy thoroughfare in the capital of Tasmania last night, where he’ll stay in isolation until Sunday night.

The latest stunt in Parr’s long career of exploring physical limits, memory, and subjectivity, ‘Underneath the Bitumen – the Artist’ is part of an ongoing arts festival called Dark Mofo, which celebrates music and arts from the underground.

Parr will apparently spend 72 hours meditating, drawing, fasting and reading Robert Hughes’s The Fatal Shore. He will be excavated on Sunday at 9pm local time. He’ll be spending his time inside a steel box tall enough to stand in but only a few feet wide and long. The container was finished by Dark Mofo when the original manufacturer pulled out at the last moment when discovering Parr would be buried in it.

Parr’s performance is a tribute to indigenous victims of British colonial violence, organizers of the festival said. Violence escalated as Aboriginal people were driven from their territory after a martial law was declared against them in 1828, killing 900.

"It is a story that is not well known, but is ever-present, just beneath the surface of our contemporary culture," Dark Mofo Creative Director Leigh Carmichael said in a statement.

"The fact that Mike Parr's work will happen underground, just out of sight, as everyday life continues above it, is clearly no coincidence."

Parr is no stranger to controversy, and this particular performance rattled the bones of many safety officials and leaders in the Aboriginal community. Hobart Mayor Ron Christie voted against allowing the performance, citing traffic concerns, but was overruled by a majority vote in favor by the council. 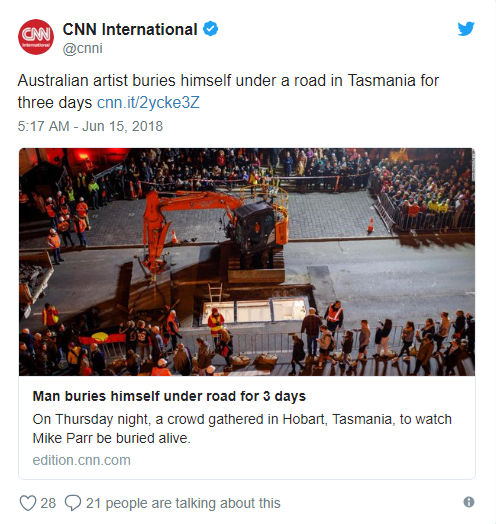 “If they have any interest in telling the Aboriginal story then they should have put it out there for Aboriginal people to do it. We have a lot of great storytellers and some old fella under a road is not the way to do it.”

Hundreds of people also watched the event on Facebook, with many asking what the point of the performance was.

Dark Mofo has already created a stir at its festival this year by placing inverted crosses around Hobart city, offending some Christians. Last year, they sparked community outrage and protests when a bull was slaughtered in preparation for a performance piece.

Mike Parr’s previous work includes sewing his lips together, hacking off his meat-filled prosthetic arm, holding his finger in a flame and pushing tacks into his leg. Taking into account everything else, being buried alive with a book and some drawing tools doesn’t sound so bad. This aims to be Parr’s third and final performance exclusively for the festival.